The Installation ceremony is the well- awaited Rotaract event during which the Board of Directors are officially elected amidst the Rotaract, Interact,Rotary and family. The Induction of the new Board of the club as well as the display of past years events mainly inclusive of all projects done are show-cased to all present. It is important to note that an Installation ceremony is conducted with a certain set of protocols which needs to be followed orderly 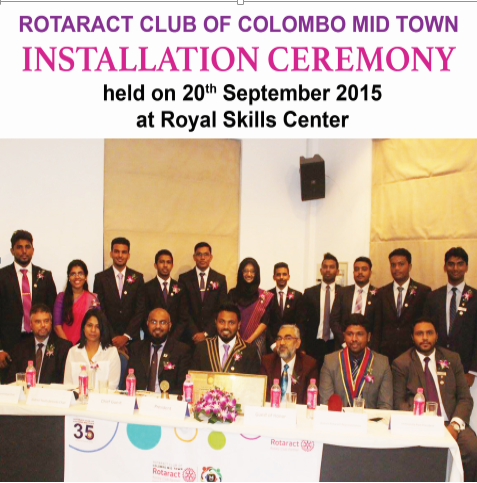 Preparations have been executed a month prior to the event. A facebook event page was created from which invitations were sent out to all close Rotaract friends. Formal invitations were sent out by the President to all Rotaract clubs, sponsoring rotary clubs and Past presidents. The support of IIHE (Imperial institute of higher education) was given through monetary support of the event where they also wanted to join hands with us in future events. For the release of the club souvenir many sponsors aided us which was indeed a great support. A whatsapp group was created with the installation committee in it, in which all decisions and ideas were input and discussed.

Each year the Board of Directors are changed, and the upcoming president of the club is collared by the outgoing president. It is during this event that all Rotaractors are given are a chance to know the new board of the club as well as be a part of the induction ceremony and show their support throughout the year to come.

Rotaract club Of Colombo Mid-Town together with its newly elected Board of Directors entered into the 36th year in Rotaract which was indeed a significant gesture to the club. The presence of all family Rotaract clubs and the support of the Rotaract District and the Sponsoring Rotary was indeed a great assurance for the stepping year to the club.

The presence of all invited clubs in numbers to this event was indeed a reflection of their sincerity shown upon our club. As expected the event concluded in further fellowship and the promise of continuous support from all Rotaract clubs.