Fanatic Futsal was a fundraiser project which was initiated to fund project Light up. We were able to not only find LKR 25,000/= but also made sure that it reached a wider audience around the globe. Local footballers from Brazil shared the fanatic futsal Trailer on Facebook for its entertaining amusement on the depiction of Mortal Kombat Characters playing futsal.

Futsal is played between two teams of five players each. Unlimited substitutions are permitted. Unlike some other forms of indoor football, the game is played on a hard court surface delimited by lines. This Futsal league was open to all Non-Rotaractos and Rotaractors as well. This is a Finance project initiated to help fund the upcoming community service project “Light Up”. 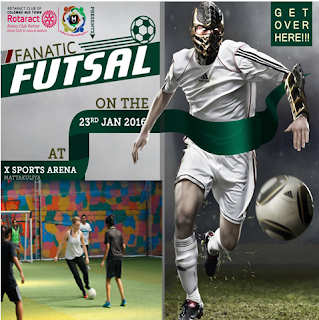 Social Media being the hub of all activities; an event page was created on Facebook. Through which requests were sent across, the main highlight of the promotion of the project was the 4D video created. This video played a significant role in capturing the eyes of many as a result we were able to close registrations a week before the deadline. The poster created for this event was circulated in Whatsapp to all members.

Fanatic Futsal was organized as a Finance Project to help fund “Light Up”. A Community service project Midtown has been initiating for the past three months with the aim of providing 100 families solar lamps in the outskirts of Muthoor. In spite of all volunteers to donate a solar lamp we wanted monitory aid in order to successfully complete this project. As a result an entertaining project as Fanatic Futsal was organized.

The outcome of Fanatic Futsal was indeed an achievement. Where we were able to reach our target of procuring a significant amount of income. This money was used to provide solar lamps for the Light Up projects as pre-planned.

The Management of venue (X-Arena) impressed with the organization, conduct and success of the event,requested the Midtown to organize their events in future. This positive outcome was indeed an encouragement to conduct similar fund-raisers in future.

Must watch Netflix Recommendations for November!

Cryptocurrency: What’s it all about?

Cryptocurrency: What’s it all about?
November 19, 2021Rotaract Club of Colombo Mid Town